In THE LANGUAGE OF LOVE, 17 year old Charlie struggles to find the words to be true to himself…and his best friend.

Written and performed by Kim Ho and directed by Laura Scrivano, THE LANGUAGE OF LOVE is a wry, sensitive and moving account of a young man coming to terms with his sexuality and facing a life-changing decision. The film was written by Kim under the mentorship of leading Australian playwright Tommy Murphy, THE LANGUAGE OF LOVE was directed by Laura Scrivano as part of THE VOICES PROJECT from the Australian Theatre for Young People (atyp).

Released in April 2013, THE LANGUAGE OF LOVE has been widely acclaimed, with leading US gay publication The Advocate describing it as a film ‘ to melt your heart’. Stephen Fry tweeted the film with just one word: ‘AMAZING!’, while Ellen DeGeneres has also backed the film, saying ‘This is amazing.’ 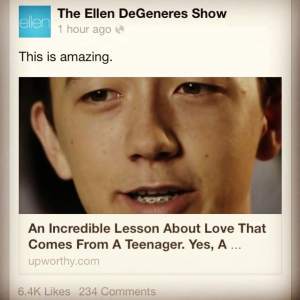 Directed by Laura Scrivano
Developed from the original monologue, TRANSCENDENCE, by Kim Ho

Watch interviews with Kim, Laura and Tommy, below.

Listen to an interview with Kim, Laura, Tommy and producer Dan Prichard, below.

Listen to an interview with Kim on PRI’s The World, below.

Watch Kim’s short piece TRANSCENDENCE, the inspiration for the film, below.

3 thoughts on “Introducing THE LANGUAGE OF LOVE”